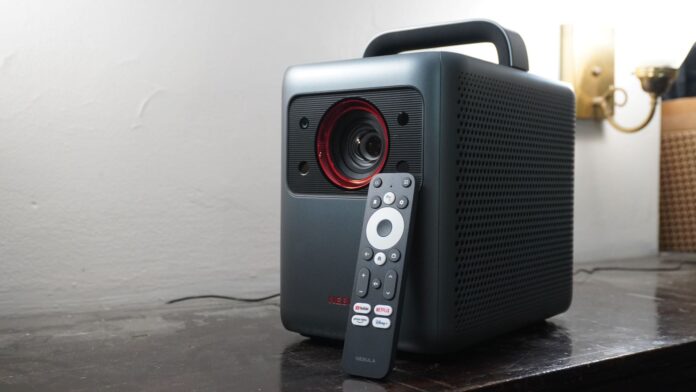 The Anker Nebula Cosmos Laser 4K projector is not your typical tiny projector. It has a high level of brightness and a laser light, resulting in a high-quality picture in a portable form factor. It also has the ability to power the complete entertainment system for whichever place you put it into, thanks to built-in speakers and an attached streaming stick that hides beneath a cover. That’s not a terrible deal for a $2,199 device.

2,400 lumens is plenty for a variety of situations, including a dark garden, a living room with some ambient light, and even a well-lit room if you’re viewing bright entertainment like cartoons and comedies. With adequate control over your ambient lighting, you can enjoy an outstanding image with the Anker Nebula Cosmos Laser 4K, which does a wonderful job of managing brightness and contrast while offering that poppy HDR colour we’ve become used to. It can’t compete with the theater-level performance of the Epson LS12000 or the colour of the triple-lasered Hisense L9G, but it’s not far behind for a projector that costs less than half as much.

There are numerous projectors in the same price range that provide a brighter 4K image, but none have the versatility of the Anker Nebula Cosmos Laser 4K for $2,199 (about £1,740, AU$3,055). Some may be less expensive, but they often employ a typical projection lamp rather than the far more durable laser light source Anker has chosen here. The Optoma CinemaX P2, which we recently saw for $2,299 and provides an even brighter, laser-based image, competes with Anker, but it’s an ultra-short-throw device that isn’t as portable or flexible in configuration but would make a better dedicated home theatre display.

There are several oddities to be aware of using the Anker Nebula Cosmos Laser 4K. When there is camera movement, the action is handled badly, making this an unsuitable choice for action movie fans. Latency is another problem that gamers face. It’s not awful enough that casual gaming is impossible, but it’s too sluggish for competitive or serious play. We too see some unusual HDR behaviour, although it’s extremely sporadic and something that a hardware upgrade may fix.

There is lots of competition for the Anker Nebula Cosmos Laser 4K, but if you want a projector that can function in a variety of locations throughout your house on a regular basis, there are few alternatives that will do it as well and as simply as this one.

Design is compact and portable.

The Anker Nebula Cosmos Laser 4K is a pleasant surprise. With its boxy form and handle cutting across the top, the item is roughly the size of a small picnic basket and feels just like one. It’s a projector designed to be portable.

A number of sensors and a huge projection lens are located on the front. Built-in sensors allow automated focus and keystoning, making it simple to set up the projector without having to fiddle with settings to acquire the precise location. Because the lens lacks optical zoom, you’ll have to settle for digital zoom to reduce the image down to suit a space, which means lost pixels and visual clarity. The keystone is also digital, which means that if you use it, you’ll lose part of the visual quality, so it’s a choice between quality and convenience. Automatic framing is also planned, but we were unable to get it to function in our tests.

Because this is a powerful, laser-based beamer, Anker has incorporated an eye-guard function that dims the lights if it detects someone standing too near to the projector’s front. Given how many individuals were caught gazing straight into the beam during our testing, that’s a useful tool to have.

The Nebula Cosmos Laser 4K comes with everything you need. It has four speakers: two full-range speakers with 10 watts of power and two tweeters with 5 watts of power. It also features a streaming stick that fits into a tiny compartment on the projector’s rear. This is useful when moving the device since there is no loose dongle protruding out the rear, and it may be upgradeable or changeable in the future. Because the streaming stick isn’t all that amazing, replacing may be the more appealing option. It often kept us waiting for much too long for it to react to inputs. On the other side, it does have appropriate Netflix compatibility, which many high-end projectors (like the Hisense L9G and every Xgimi projector) continue to lack.

In addition to the HDMI connector for the bundled streaming stick, there is another HDMI port on the rear for an additional video source. The streaming stick may connect to music devices wirelessly through Bluetooth 5.0, or the projector can connect to external speakers via a 3.5mm Aux connection. External audio is a nice idea in general, but the projector’s speakers sound quite well balanced and perform an excellent job in a small, calm environment. They won’t be enough to get you through a loud environment with people chatting or a fan running.

While the projector’s image keystone and zoom may be modified, adjustable feet to vary the angle of projection would have been useful. For testing, we utilised a stack of tiny books to support up either end.

The Anker Nebula Cosmos Laser 4K comes with a remote control, however it just controls the streaming stick functionalities. The remote does not control image settings like as focus, zoom, colour modes, and so on. That requires navigating using the projector’s built-in controls or its smartphone control app, which is annoying.

The Anker Nebula Cosmos Laser 4K projector delivers impressive performance for such a little device. While other projectors we’ve reviewed, such as the Hisense L9G, may function as a home theater-in-a-box, the Anker Nebula Cosmos Laser 4K is a portable home theatre. It has a maximum brightness of 2,400 Lumens, which is suitable for a semi-controlled atmosphere. In the middle of the day, drawing the shades and reducing the lights is enough to provide a nice viewing experience, while full darkness results in a beautiful picture that allows contrast and colour to show through more strongly. Even with darker material in a slightly darkened area, it’s adequate for casual watching, and comedies and cartoons come through pretty well without controlling the ambient light. And this is based on our experience with the image extended over our wall for far over 100 inches. Using a projector screen or lowering the size may improve the image.

There are cheaper projectors that can reach as bright, but Anker is providing a 4K picture (still through pixel shifting) that is adequately crisp even when blown out to huge dimensions and even when the image pixel count is scaled down via digital zoom and keystoning. This brightness is also provided by a laser light source with a lifespan of up to 25,000 hours. There may be a little rainbow effect, but we didn’t see it.

We were relieved to learn that the projector did not have the repulsive motion interpolation out of the box. We were surprised to see no motion interpolation choices. That may be good news for some, but it might be due to a lack of expertise in this area. We observed the projector straining to maintain the playback smooth during action scenes with a lot of character and camera movement while watching Captain America: Civil War. It wasn’t a bad experience, but it fell short of expectations and should be avoided if you like action movies. This is especially true for professional gaming, where motion and considerable input latency would be a hindrance.

This was not the only flaw we detected in the image. We noticed several unusual peculiarities in how it handled some video when HDR was activated. Specifically, Amazon’s Sneaky Pete would sometimes have sequences with incorrectly handled colours, resulting in some strange posterization and colour banding. The problem didn’t appear in any other video we watched, but it lasted throughout episodes from all three seasons of Sneaky Pete, which we watched on both the bundled streaming stick and a Chromecast with Google TV, and it would happen again if we rewound to view the scene again. This implied that some HDR signals will be misconstrued. The problem was resolved by disabling HDR, however this resulted in a substantially duller image with a lot of life drained out of it. HDR may also deepen shadows, making it more difficult to perceive content without lowering ambient light in the space.

It’s not all terrible for the HDR image, which can be rather luscious most of the time. The throne chamber combat sequence in Star Wars: The Last Jedi was rich in the reds of the environment and people, and the subsequent assault on the rebel stronghold maintained the high visual quality.

Should I buy the Anker Nebula Cosmos Laser 4K projector?

You want a portable projector that is powerful.

The Anker Nebula Cosmos Laser 4K is a dazzling little beast that is small and portable. It may make certain sacrifices in the sake of mobility, but it has a lot of potential. It’s just a shame it can’t operate on batteries.

Anker’s hardware takes care of a lot of the hassle. It can keystone and focus automatically, as well as manually reduce the image, making it a set-it-and-forget-it gadget.

You do not want to change the bulb.

The Anker Nebula Cosmos Laser 4K’s laser light engine has a 25,000-hour lifetime, so you’ll never need to replace it. We’ll probably all be viewing 32K content with AR glasses by the time that bulb burns out.