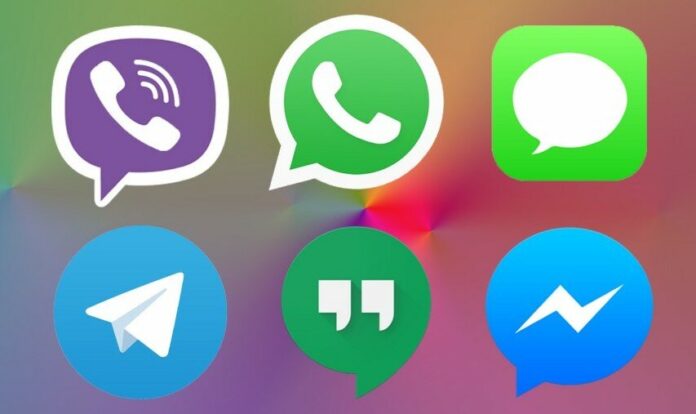 Who doesn’t text? It has become a huge part of our daily lives. And most people prefer texting over talking phones. More than 6 million SMS are sent every day. Text messaging is one of the most popular, preferred, cost-effective, and easiest way to communicate with your friends and family. It is easier, quick, and convenient. Although all Android phones come with their own messaging app, quite often they are downright terrible.  There aren’t many features, to begin with, then there is the poor design. Moreover, there are a few native text messaging apps that are rather poor in MMS as well.

That is where messaging apps come into the picture. There are some great third-party messaging apps out there. They come with numerous features and user-friendly as well. The best messaging app for you is the one that suits your needs the most and the one you can convince your people to use. But how to pick the best one? So, to help you out, we have compiled a list of the 10 messaging apps for Android.

Today, we are going to take a look at the top 10 messaging apps of 2020 without wasting any time, let’s start:

This app is free with in-app purchases. An up and comer, Band is gaining popularity at a fast pace. You can create as many groups as you want and invite as many people in them. There is no restriction. This app is has been designed, especially for youngsters who are in sports teams, gaming clans, school groups, etc. The app is great to communicate and collaborate in a group. You get to organize the groups into different channels. Also, you have the option to directly message individuals.

Are you a gamer? Then this app is for you. It is one of the best apps that is tailored to the needs of gamers. It comes with cross-platform support for most of the computer operating systems and mobile phones. Also, for those who don’t have a native app, there is a web client for those as well. With Discord, you can have GIF support, voice chat, and the option to do multiple text chats. Moreover, people can create their servers or team up with others if they want to. As said earlier, this app is ideal for gamers. But even then, some people are using Discord only for its amazing organizational system along with average voice chat capabilities.

The app is for free, and anyone can use it. However, if you wish to unlock some great features, you would have to get the Discord Nitro subscription. The price ranges between $9.99/month to $9.99/year.

Facebook is the most popular social media platform. It comes as no surprise that its messaging app ranks among one of the bests messaging apps for Android. When it comes to Facebook Messenger, the tech giant offers you two chat options. The regular one has all the features that you like, such as voice and video call, chat heads, and other features. However, the Lite version does not have all this. You could call it basic. There are no extra features, just chat options and limited features.

However, those who are addicted to the social media platform and its messaging app they would want to use the regular app. Those who don’t want anything extra can do just fine with the Lite version. Although ads are being introduced, they are still free to use.

Next on our list of best messaging apps for Android is Kik. It comes for free with in-app purchases. You can choose a screen name for yourself instead of a phone number or real name. Kind of old-school. But many people still like it. Kik has gained popularity among the masses like casual mobile gamers and those who like to do chat randomly. You can use stickers and emojis in chats. There is the option of changing themes, group chats, and video chats as well. Moreover, the option of in-app purchases allows you to get additional sticker packs and enjoy other features.

There is another chat app in this genre GroupMe in this genre. It also offers the same features and caters to the same type of people.

Among the top 10 messaging apps, Slack is one app that is ideal for businesses. It depicts a sleek and professional look and feels. It is great for businesses charging $6.67 – $12,50/per user. But this app is for business use only. The different groups can create channels, do voice chats, and share images. Since the app comes with support features for third-party apps like Asana, Google Drive, and Giphy along with numerous other tools.

Moreover, users can also join multiple Slack servers. It wouldn’t be wrong to say that Slack is a more professional and business looking version of Discord. The app is for free, and there are no in-app purchases either. However, those who have larger teams, that need more features could pay an optional subscription fee to get extra stuff for free in the future.

The app is free and comes with free in-app purchases. It is one of the most popular apps. Skype does not need any introduction. It has been around for a long time now. One can call it the pioneers of messaging apps that let you do audio and video calls both. Nowadays, almost all apps offer the same features. It is widely used in business places. The app allows you to call people on real phone numbers by paying a nominal fee.

However, Skype comes along with few features that may or may not be of any use to you. Nonetheless, Skype is excellent cross-platform support. It also supports multiple chats and a variety of file types such as documents, GIFs, and other stuff.  There is a Lite version as well if you wish to use Skype but don’t need the extra features.

Snapchat is another free app and is one of the best messaging apps for Android. It is one of a kind and truly unique. The app is particularly popular among tweens and teens. Snapchat supports several things, such as voice calls, photo messages, video messages, and text messages as well. An interesting feature of the app is that the service deletes messages after viewing. So, there is no history left behind to talk about apart from the streak counter. Then, there are the Snapchat stories. That is quite addictive. This allows the users to upload statuses all of their followers can see.

The Snapchat stories expire in 24 hours. Other apps have copied many features of the app as well. Instagram is a popular example. The app is different and quite popular among students and teenagers.

When privacy is a major concern, then you don’t need to look any further than Telegram. It is a renowned name in private messaging apps. The app comes for free. It boasts some incredible features like 256-bit symmetrical AES encryption, 2048-bit RSA encryption, and a lot more. Owing to these safety and encryption features, telegram ranks amongst the safest out of the 10 messaging apps on our list.  The app allows for file sharing, cross-platform support, group chat, and GIF support.

The app rose to heights in a short span. So, at first, it was but difficult to judge its performance. Now, the app has tons of users. Another decent app in the same space is Signal Private Messenger. Both of these apps rank on top in terms of privacy and security.

With users in billions, WhatsApp is the most trending messaging apps globally. Everyone knows about it. It comes for free. However, there is news that there might be charges for business accounts that use WhatsApp for business. WhatsApp comes with a wide range of features and gets frequent updates as well. It positively can give competition to every other chat app. WhatsApp includes both video and audio chats; you can share images, videos, GIFs, and send text messages to individuals as well as group chats.

WhatsApp is a powerful app. It is both accessible and popular among the masses. It comes for free with no in-app purchases.

Last but not least on our best messaging apps for Android list we have Viber. The app comes for free with in-app purchases. Viber is not as popular globally as WhatsApp is. However, it is quite a popular app in many areas, and rightly so. You get to send and receive messages, video messages, do group chats, and even self-destruct chats. There are extra stickers, worldwide news, and a lot more.

You need to pay for getting more stickers. All in all, using Viber for messaging proves to be a good chat experience. In terms of size, however, the app is a bit heavier. So, it may not suit those with a requirement of minimum hassle.

There, you have it. These were the top 10 messaging apps of 2020. Now, you don’t need to store all of these apps on your phone. This list was just to help you decide. You will come across many other apps on Google App Store. However, these apps made it to our list due to their ease of use and functionalities.