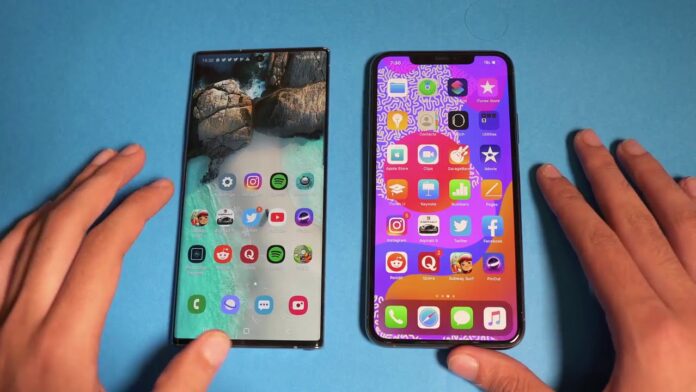 Featuring a sleek design with a plethora of latest features, Apple’s iPhone 11 series including the 11 Pro and Pro Max are pretty amazing. Especially the iPhone 11 Pro Max truly depicts all that is new in smartphone technology, not exactly surpassing the iPhone XS Max in terms of an upgrade.

However, there are a couple of other high-tech phones out there, including the Samsung Galaxy Note 10 Plus, which is another trending smartphone that comes with a wide range of amazing features. So, among iPhone 11 Pro vs Samsung note 10 plus, which one is a winner?

Today, we are going to compare the two in detail and see which of the two devices is better.

Let’s dig a little deeper. As said earlier in iPhone 11 pro vs note 10 is the smaller ones of their respective phone series. However, you cannot compare them to their screen size. The iPhone 11 Pro has a display of 5.8 inches. On the other hand, Samsung’s Galaxy Note 10 is 6.3 inches, which is approx. 9% larger. Both come with sharp OLED display technology. iPhone 11 Pro has the Super Retina XDR display by Apple while Galaxy Note 10 comes with Samsung’s Dynamic AMOLED Infinity-O display.

Since the camera cutout is smaller on Note 10, the usable screen space is more4. Also, the front-facing camera shifts to the center for better symmetry compared to its predecessors. Both Note 10 and iPhone 11 Pro offer high brightness and support HDR content.

One of the key changes on the iPhone 11 Pro from the former ones is the rear camera system. The 11 camera features a triple-camera setup on the back. This external design is called a camera square. Apple has also come up with an ultra-wide camera for joining the wide and telephoto cameras. Combined the camera offers 12 megapixels. The ultrawide one has a 120-degree field of view taking wide shots. The key camera offers a wide range of features.

Note 10 does not lag. It also includes three rear cameras a 16-megapixel ultrawide camera with a wide-angle 12-megapixel and telephoto cameras. The phone also offers live focus videos to make it easier to blur backgrounds on videos and a zoom-in mic for focusing on the audio source. You get to use advanced video editing capabilities as well with S Pen Stylus.

Apple reports having improved the battery life for the iPhone 11 Pro. Compared to iPhone XS, the device lasts for four hours longer. As for Samsung, the 3,500 mAh battery indicates that the user might be longer than the iPhone 11 Pro that comes with a 3,046 mAh battery. The AI technologies of Note 10 learn how users consume the battery and adjust accordingly like closing an app that is no longer in use.

Moreover, both the iPhone 11 Pro and Galaxy Note 10 can be charged wirelessly, with a Qi charging pad.

The A13 Bionic, Apple’s latest processor, powers the iPhone 11 Pro. The company calls it the fastest chip ever in a smartphone. The A13 Bionic comes with a six-core CPU, which includes two high-performance cores. This allows 20% faster CPU and GPU than the A12. Moreover, four low-power cores have a 40% improved energy efficiency than the A12.

Also, the A13 Bionic comes with improved capabilities for machine learning via new machine-learning accelerators. This allows the CPU to deliver more than 1 trillion operations per second. Note 10 has improved performance as it comes with the Qualcomm Snapdragon 855, which happens to be an 8-core processor. The chip allows for gains of 33% in terms of CPU performance. Also, compared to Note 9, it is 42% faster. Samsung has reported that this shall assist in PC-level performance with the inclusion of 8 GB of RAM which is double the 4 GB of RAM in iPhone 11 Pro.  However, A13 Bionic takes the lead over Snapdragon 855.

There is a single configuration for internal storage in Galaxy note 10 of 256 GB. Unlike the rest of Galaxy devices, Note 10 does not offer microSD for expanded storage. However, those who choose to buy iPhone 11 Pro have more choices as Apple offers a variety of internal storage in the form of 64 GB, 256 GB, or 512 GB.

Galaxy Note 10 happens to be the only device that comes with an included stylus. The S Pen stylus is present inside the Note 10. The company has made the design more durable. The new Note supports air actions as well which means that the users don’t have to touch the display to perform particular functions like the gallery, camera, and music/video libraries. For example, the camera comes with six air actions. You can change the camera mode, by swiping left or right. You can switch between the front-facing and rear sensors, by swiping up or down. You can zoom in and zoom out by rotating clockwise and counterclockwise.

The users won’t have to be pointing straight at the display for the air actions to work. Users would need to hold down the side button.

DeX is one of the main features that make Samsung Galaxy devices ideal for business users. This allows the users to pull up an Android desktop on compatible screens by plugging their device. Samsung has made DeX a lot more usable with Note 10. The users can pull up their DeX desktop on a PC as well as Mac by simply plugging into the computer via USB-C to USB-C cable.

This way the users can access the keyboard or mouse when they need and do so without using a laptop. The users can also move the files back and forth and use DeX in full-screen mode on PC or Mac. Then, there is the Link to Windows feature through which the phone’s messaging and notifications appear on the PC. And this functionality has been directly integrated into the Quick Panel for the user for easy connectivity of their phone to PC.

If you compare with Samsung’s Note 10, the starting price for an unlocked model of the Galaxy Note happens to be $50 lower. Also, the iPhone 11 Pro comes with 256 internal storage which is the same amount present in the Galaxy Note 10 that is going to cost another $150. For a total price of $1,149 or $200 above the Galaxy Note 10.

When it comes to picking between the two, the Note 10 Plus vs iPhone 11 Pro, it has a lot to do about personal preference as well. Apple users hardly like anything else once they have used iPhones. On the other hand, according to benchmark results, A13 Bionic present in the iPhone 11 seems to take the lead with 1329 points on single-core processing over 697 points of Note 10. As for multi-core, Apple scores high with 3, 405 compared to 2523 of Samsung.