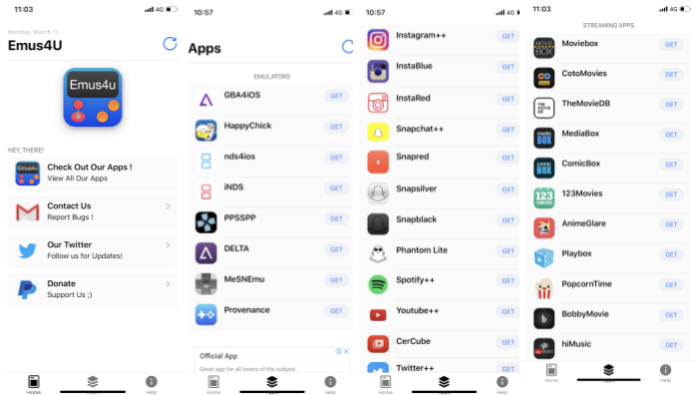 Google Play or Apple Store is the go-to destination for Android and iPhone users when downloading apps.

Google Play is the leading digital distribution service over Android, with over 52 million billion downloads in 2020. Currently there are as many as 3 million available applications on the store.

Apple’s app store is the predominant app for the iOS ecosystem. It has raked over 18 billion downloads just in 2020 alone. If you’re a developer looking to publish an app, or a user looking to download one, the App Store is the place to be, right? Well, yes. But actually, no.

Why Use an Alternative App Store?

The reasons may vary for each user and customer. Maybe the alternative app store (iOS) has an app that is not available in your region via the normal Apple Store. The app may be in the development stage or your device might not have access to it in the Google Play Store.

This is not an issue anymore because there are tons of 3rd party free app stores for Android (and iOS) on the platforms for you to choose. These third party Android app stores let you download apps of your choice without Google Play and also allow you to get paid apps for free, or a discount on premium apps. Cost effective. Convenient. And freedom to choose.

Many of the Alternative App Store (iOS and Android) are not competing with the Google Play or App Store. Many of them provide users with incentives like “App of the Day” promotions or advertising discounts to app owners.

As a developer, you have more chances to rank your app on these alternative stores since App Store and Google Play are oversaturated and overcrowded. If it’s a Minimum Viable Product (MVP) you want to test for free, it’s the best place to be. And if you want to bypass the registration fee which is $25 Google Play (one time) or a $99 fee for App Store (annual fee).

Lastly, there are third party store for Android and iOS which have apps that have not been currently released on the Google Play or App Store. And perhaps they never will. The exclusivity of these apps and their availability on these platforms alone is a reason to explore the list of app stores for Android.

How to install third party apps without the Google Play Store

Installation of applications from a source other than the trusty Google Play Store is not allowed by default on Android. For this, you need to “enable app installation from unverified sources” on your Android.

You can do this in the following steps.

Are There Any Risks to Downloading from Alternative App Stores?

With so many listed benefits to using a third-party app store, one must wonder: is there a flip-side to the coin?

The most obvious risk is virus and malwares. With 3rd party app store for Android, security policies vary. The security protocols are lax and before you continue installing an app, do read the terms and conditions of the third party app stores you are using.

And then there’s apps, that are just illegal or banned. Needless to say, some of the apps may not turn out to be as transparent as they claim to be.

In this article, we explore the top free app stores for Android and an extensive list of  App Stores for iOS. We’ve sorted our list on the basis of following factors:

• Ease of Use (Does it require rooting or jailbreak?)

• Number of Times App has been downloaded (How popular is the App?)

• Availability of Dual Platforms (Is it available on both Android and iOS?)

We start this guide by rating our top choices for third party app store for Android ecosystem.

TweakBox is an easy to use alternative iOS app store. It has a good respoistory of apps (such as the Panda Helper). This app store does not have malware and provides great compatibility with all iOS devices: iPhones, iPods and iPads.

The app allows you to download movies and music alike, in addition to tweaked apps.

• Does not require Jailbreak

• Some of the tweaked apps (YouTube & Spotify) have enhanced functionalities.

Cydia is regarded as the leader among alternative iOS App Stores. A pioneer in the field, Cydia apps come in both paid and free applications. This alternative app store can be considered as the first ‘unofficial’ app store for iOS of its kind. However there is a drawback: You need to jailbreak your iPhone to download and install Cydia apps.

Cydia apps may have been rejected by Apple for a couple of reasons: They either violate Apple’s terms and conditions or they compete with Apple’s own native apps.

With more than 300 million users of the app store to brag of, TutuApp deserves a place on this list. For developers, the app submission process is easy while having access to various banking systems around the world. The SDK for devs isn’t too shabby either.

The TutuApp games list is extensive while for older phones there’s also a TutuApp Lite version. TutuApp VIP (iOS), free of ads, will be launched soon.

AppValley store offers plenty of tweaked apps on its offerings. These apps have modified features that one cannot find the stock versions. These enhanced-feature apps include Whatsapp, YouTube and Spotify among others.

AppValley store is generally safe and secure to use.

EMUS4U is third party app store alternative for iOS. Its offerings include not only apps but also very customizable themes and wallpapers. The app store has thousands of offerings that you won’t find in a traditional iOS App Store. These include a very neat screen recorder, junk cleaner among many others

EMUS4U does not require jailbreak to install and use.

Amazon App Store is a third party App Store for Android that competes directly with Google Play Store. Instead of visiting a website, you access your Amazon app store account and download an APK file. Then you install it on your Android.

It is one of the top contenders on our list of app stores for Android. It has a wonderful analytics service which facilitates devs and it offers an app compatibility test that detects any unseen problems for developers (such as any issue with platforms like Amazon app store for Fire Tablet).

Amazon App Store developers also get 70% of app’s price (and the in-app purchases).

For devs, take notes. Here’s what your audiences are most likely to search:

After Cydia, Aptoide is one of the earlier entrants in the 3rd party app store Android market. It offers every application available in the Google Play Store (and then some!). A surprising fact is that Aptoide comes bundled as default by some smartphone manufacturers and their default Android App Store.

SlideMe is an alternative third party App Store for Android.It offers an easy-to-install interface and is very popular with OEMs (Original Equipment Manufacturers). Over 10 OEMs use SlideMe alternative app store. The SlideMe app installer is intuitive and the

The 3rd party app store Android (SlideMe) developers can put their apps on the platform for free or offer a paid version. All of the apps pass through a stringent quality control process before being published.

GetJar is the oldest alternative app store in this list of app stores for Android. It has been around even before Google Play Store. It caters to every platform, even legacy ones such as Symbian, Blackberry, Windows & Android.

The apps in GetJar download interface are organized neatly. After the new GetJar update a while ago, you have access to tons of themes.

Offerings in the GetJar games category are also enviable and boast of legacy GetJar java files from the last two decades as well. You can download APK files of apps long forgotten from public memory as well.

FDroid is the last item in our list of third party app store for Android. The F-Droid repository focuses solely on FOSS (Free and Open Source Software) apps. You can download the F-Droid client and download a vast collection of apps, free of charge.

F-Droid is popular among developers because they have easy access to the code in the F-droid repository.  They can use the part of the codes to make their own apps.